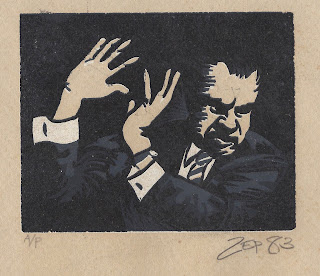 As Nixon lay dying in New York City, in April of ’94, I stayed on my couch for three days, never turning off CNN - waiting, barely sleeping, unshaven and disheveled, for the demon to depart. I fielded calls from old friends, who sent me clippings and bits of Nixoniana, and from the occasional reporter, asking me for comments. I’d become known as something of a Nixon obsessive, particularly since I had managed to get thrown out of his presidential library on opening day. It was one of the proudest days of my life.

One of my earliest memories of Richard Nixon was watching a goofy little ceremony, the day after his inauguration in 1969, where he introduced the members of his new cabinet. I would have been about eleven. In the middle of one of his awkward jokes about the new Postmaster General, our babysitter, Mrs. Berglund, walked into the room. “OH MY GOD!” she shrieked. “I CAN’T BELIEVE THAT CROOK NIXON IS PRESIDENT!”

Our family had voted for the other guy, but what did I know? The new president seemed like a reasonable enough guy. Give him a chance, I thought.

It wasn’t long before I understood what Mrs. Berglund was wailing about. By twelve I was participating in antiwar protests. At fifteen I was walking precincts for George McGovern. I had bet my best friend, when McGovern was just a blip in the polls, that he would be our next president. I still remember the grumpy look on the face of the bank teller when I told her I needed to withdraw five bucks to pay off an election bet.  She gave my friend the hairy eyeball.

But I bet him that same fiver that Nixon would not survive his second term because of Watergate. Twenty-one months later, I was at Dodger Stadium when the Jumbotron lit up with the news that the Supreme Court had ruled unanimously that the president had to release his Oval Office recordings. The place went wild; two weeks later he was on live TV, numbly reciting his resignation speech under heavy sedation.

I’ll always be grateful to my grandmother for waking me up early the next day, on the morning of August 9th, to watch his bizarre, rambling, stream-of consciousness farewell to his White House staff. Whatever Nixon had been on the night before, it had clearly worn off. “Mark,” she nudged me, “you don’t want to miss this.”

And then he shambled off to his helicopter, but Richard Nixon would never really leave us. He’s left his mark on our politics to this day. Little did we know, that day we thought we were rid of him, that his treachery and paranoia would be institutionalized into a new conservative style of governance that is metastasizing as we speak.

It would take a Shakespeare to do him justice, but I tried my hand at surveying the damage done while I was at art school in Santa Cruz. A kindly professor had suggested I enroll in the book arts class taught by a retired newspaperman named George Kane. I fell in love with the process of setting movable type by hand, and printing my own linoleum-block illustrations. For the final project, Kane said we could do a book on whatever we chose. Most of the other students were doing poetry; I wanted to tackle Nixon.

When I graduated, I decided to rework my college prototype into a full-length book. I bought an old Vandercook-4 printing press and a cabinet full of lead type and set to work in my garage over thousands of radio-blasting, caffeine-fueled hours, to produce The Nixon Saga: A Pathography in Twelve Parts. A pathography, coined by Joyce Carol Oates, is the opposite of a hagiography; it has nothing good to say about its subject.

My pathography took years to finish, and it really isn’t finished yet. The illustrations used the reduction print process, developed by Picasso, in which the same block is carved repeatedly and printed with progressively darker shades of ink each time. It’s a painstaking effort, and trying to keep the multiple press runs precisely registered led to a lot of spoiled prints. Still, I managed to come up with a couple hundred good copies, and sold nearly all of them over the past few decades.

But I had promised patrons who purchased the “deluxe edition” that I would include bookplates, bookmarks, a dust jacket and a poster – and somehow a quarter century had passed before I got around to fulfilling that promise. I had sold the print shop when I moved to Arizona, but recently I discovered the U of A Letterpress Lab, and I’ve gone back to work creating Nixon memorabilia once again.

Since January I’ve been showing prints from The Nixon Saga in the gallery room at Borderlands Brewing Company. And I’ve worked with a local bookbinder, Panther Peak Bindery, to create 40 new copies of the book, using signatures I’ve kept in storage over the years. So now that the old ghoul is on my back again, I’m launching a new website, www.nixonsaga.com, where I can sell copies of the book and loose prints for prices ranging from five bucks on up to several hundred. Stop by and visit when you can, because I’m not done with Nixon yet – nor is he done with me.

Posted by MZepezauer at 4:36 PM